Showing posts from June, 2009
Show all 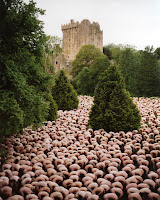 The exhibition of photographs taken by Spencer Tunick last year was on recently. It was called an exhibition, but they didn't even go to the expense of making prints. The photos were projected from a PC. It is interesting that despite the huge fanfare that accompanied the taking of the photographs, the display of the photos themselves was a non-event. The artist, as far as I know, did not even put in an appearance. This suggests that my suspicions were justified. It was never about creating photographs. It was about hundreds of people getting naked in a field. The photography was a side show. I am a bit disappointed by the pictures that were displayed. I found some of Tunick's other work very interesting. The Blarney pictures are a bit twee, sort of John Hinde postcards with naked people.
Post a Comment
Read more

By ColinM - June 04, 2009
The googlemobile drove past my house today at 1442, so I guess I will be on street view in due course. I was expecting it to look more impressive. I had hoped to stage some frightfully clever piece of performance art in the front garden. Perhaps a commentary on the survielance society, but in the end all I had to show was my empty coffee cup on the window sill. The siñorita will probably give out about about that once a week every week until the googlemobile comes around again. The month in the run up to an election seems like an unfortunate time to build up a street view database. Election posters all over the place will obscure some views, will date the pictures, and will send the face blurring algorithm into overdrive.
Post a Comment
Read more
More posts