Showing posts from 2011
Show all

By Colin Manning - October 16, 2011
I noticed that the latest version of iTunes includes iCloud. I took the opportunity to download some tracks I had purchased over the past few years on different machines. Ironically the only full album I ever bought from the iTunes Music Store can't be downloaded because it's not available in the Ireland store anymore. It's interesting how big corporations and content companies want a free market when it comes to them expanding into new territories, but when it suits them they like to do things country by country. Last christmas I got some free downloads as a result of making some CD purchases at Amazon.fr. But I had to actually go to France , to download them! I bought the album back when iTunes Music Store used DRM. It will be interesting to see if iTunes will still authorize it for playback. When will content owners realize that they should stop pissing off the people who are actually prepared to pay a fair price for their content. It seems they are determined to m
Post a Comment
Read more

By Colin Manning - October 08, 2011
I watched [rec] last night. I had been meaning to watch it for a long time but it's not easy to do that in a house with kids. I was a non-stop scary ride. It's interesting that someone can still find a fresh take on the zombie after so many years of the genre. I was worried that the Spanish language and English subtitle might take from the raw reality TV feel, but it didn't get in the way at all. If you haven't seen it, think blair witch meets 28 days later. It was surprisingly not that gory. Much of the violence happens off screen. It's definitely worth a look.
Post a Comment
Read more

Writing a Debt Ceiling into the Constitution is Pointless

By ColinM - August 18, 2011
Recent proposals from the French and German governments on dealing with the Euro debt crisis are interesting. But writing debt ceilings into national constitutions is a bad idea. Countries that have constitutions generally use them to specify the relationships between the state institutions, details of how the democracy works, the rights of individuals, and the limits of state’s power. Very few constitutions anywhere go into specific details about state finances. Constitutions set out basic principles and ideals. The grubby business of politics is left to fill in the details. How money is raised and spent is a policy issue and is largely left to the governments that the people elected. It is not a constitutional issue. The Constitution of Ireland goes into great detail to specify how laws are passed and the role of both the lower and upper houses in passing these laws. However it treats finances differently. There’s a section of the Constitution called “Money Bills” containing Article
Post a Comment
Read more 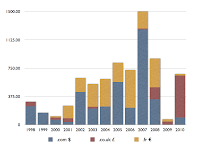 I was buying books online before the web. That sounds impossible, but believe it or not there was a company that allowed you to telnet into its server, search for, and order them. Books have traditionally been expensive in Ireland. Retailers had high margins and books were priced based on IEP/EUR equivalent of UK prices. There is no VAT on books in Ireland so they could be safely imported from the US without additional taxes. I've been looking at my Amazon spend over the past years. My account details in Amazon list pretty much everything I've bought. It's been instructive. The main thing I've learned is that I probably need to buy less and read more. Some of the figures are staggering. In 2007 I spent well over $1000 at Amazon. That was all books. I can't buy DVDs and CDs at Amazon.com. That doesn't include any books I might have bought at other sites like Barnes and Noble. My buying habits have changed. Amazon.com was my long term favorite, but Amazon
1 comment
Read more

Have I bought my last CD?

By ColinM - March 24, 2011
I did a bit of shopping in the January sales at Amazon. There were some excellent offers. I bought 4 CDs at Amazon.fr in the 4 for €20 sale. I am quite happy to pay €5 for a CD. That's a good price. It's not that long ago I was lashing out €20 - €25 a pop. But I think I am done now. I have little sympathy for the troubled music industry. Even a few short years ago when I wanted to buy a particular single, it was not available. In fact there was no legal way to get it except wait until the whole album came out. Amazon has gotten a lot of my money over the years, not because of price but because of choice. I remember many years ago going to one of the main retailers in Cork looking to order an old movie. They had no interest in acquiring it for me. Their business was based on selling many many copies of the most popular items. I guess in time I will buy more at iTunes. So far I've spend less that €30. For now I think I will just enjoy all the music I've bough ov
Post a Comment
Read more
More posts