Interlacing of the Body Snatchers 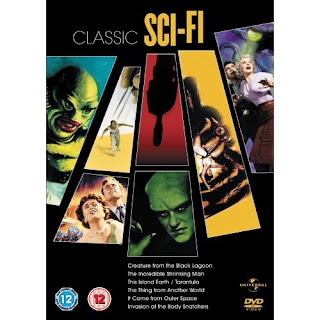 I recently bought a Sci-Fi Box set that had six old movies in it: Invasion Of The Body Snatchers, Thing From Another World, Incredible Shrinking Man, This Island Earth, Creature From The Black Lagoon, and It Came From Outer Space. I like old movies and I thought some of them would be fun. I was most interested in Invasion of the Body Snatchers [1956] since this is a very famous movie. Mercifully the movie came in both the original Black & White and the colorized version. Someone who is going to be interested enough to pay for a movie like this is not going to be interested in seeing a version with colour added sometime in the 1980s. I was very disappointed by the quality of the picture. The box claimed that the movies were digitally re-mastered. Not only was the picture quality shabby in Invasion of the Body Snatchers, but it was interlaced. This means that the DVD was made using a transfer from video tape rather than actual film. That is very disrespectful to the film maker and to the customers who forked out hard cash for the DVD. This is the kind of shabby treatment from Hollywood that makes would be paying customers turn to illegal downloads.
Movies Technology Television