This infographic from the WIPO has some classics from the misinformation tool kit. It wants to show the increase in Domain Name cases in 2016 and the relative sizes of the industry sectors they came from. But by increasing both the height and width of shapes used to represent them, the differences are exaggerated. 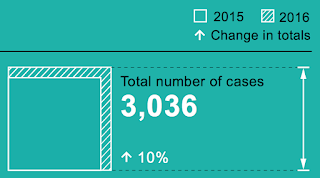 This graphic tries to show that the number of cases has increased by 10% and the height of the shaded square behind is indeed 10% taller than the unshaded one in front.  But the width has also been increased by 10%.  This is deceptive because the area of the shaded square is 21% greater than the unshaded one.  A more accurate representation would look like this: 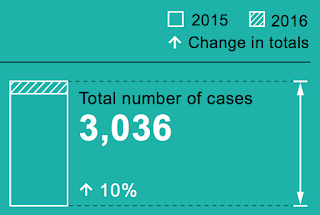 The same error is made in the breakdown by country, but it is especially egregious in the case of France.

This attempts to illustrate the 38.3% increase in cases from France.  But an increase of 38.3% in both the height and width of a square results in an increase in area of a staggering 91%.  A more accurate representation would look like this: 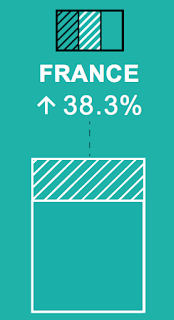 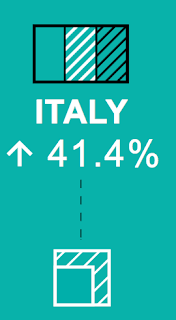 The same visual misrepresentation can also occur when heights of circles are used.  A 10% increase in the diameter of a circle results in more than a 10% increase in area.

A table on the right of the infographic shows the number and percentage of cases by industry sector.  A pie chart is an ideal tool for this kind of data and the designer has indeed used pie segments to show the percentages.  For comparison the largest sector and smallest sector are shown together below: 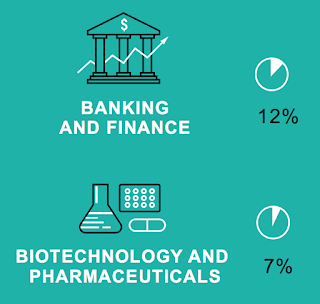 However when the same difference in size is represented using circles the effect can be misleading. 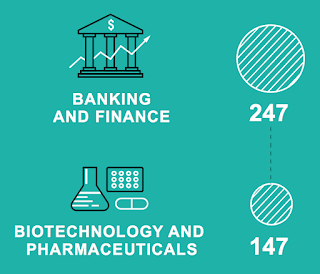 The contrast between the pie segments and the circles is startling since the are attempting to illustrate the same difference in size.  The circles greatly exaggerate the difference.

By Colin Manning - January 17, 2022
The pandemic is not the first time Irish government has prevented people from travelling to Spain. All the current talk of special credentials required by Irish people to leave for Spain reminded me of the Spanish Civil War (Non-Intervention) Act, 1937.  This law enacted by the Irish Free State (Ireland was not yet a republic) was intended to stop Irish people from travelling to fight in the Civil War in Spain. Section 5 of the act made it unlawful to join either side ("belligerent") in the war or to "induce or attempt to induce persons" to do so.  Section 6 stated that "It shall not be lawful for any person who is a citizen of Saorstát Eireann to depart or attempt to depart from Saorstát Eireann for the purpose of proceeding to Spain ... unless such person holds a passport ... bearing an endorsement ... declaring such passport to be valid for Spain and Spanish territory." https://www.irishstatutebook.ie/eli/1937/act/1/enacted/en/print.html A person who &q
Read more 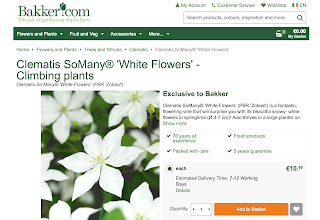 Bakker is a vendor of plants that operates online and by mail order.  The company annoyed me some years ago by sharing my details with third parties without my permission.  People who buy plants by mail order are quite an attractive demographic and so it's a nice little sideline for the company.  I ended up getting a lot of junk mail as a direct result of this and I eventually traced it back to Bakker.  I was in the market for some plants today and so I e-mailed to the company just to make sure that their practices had since improved.  The reply I got was not conclusive enough to make me part with my money. While there I noticed some very nice clematis that go by the name of So Many®.  I was struck by the registered trade mark symbol.  It is unlikely that such a trade mark would be registered in Ireland since it is merely descriptive.  It is actually an offence in Ireland to use this symbol for a mark that is not registered under Section 94 of the Trade Marks Act. 94.—(1)
Read more